Do you want to do postgraduate studies according to your performing profile? 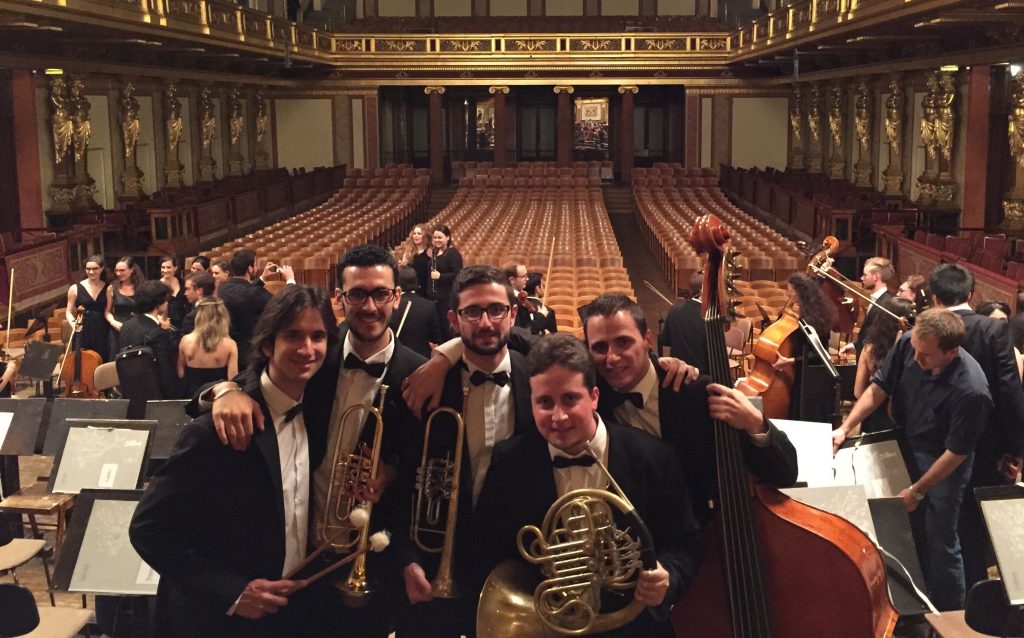 Presentation of the Master: INTERPRETATION AND RESEARCH OF THE MUSIC 2017-18

Professional interest and researcher of the Master

Entry Examinations Specifications 2020-21 (because of COVID-19)

In order to gain access to the official Master’s degrees, it will be necessary to have an official Higher Degree of artistic education, an official Degree or Graduated Degree or its equivalent issued by an institution of the European Higher Education Area which authorizes in the country issuing the Title for access to Master’s teachings.
They will also be able to access the graduates according to educational systems outside the European Higher Education Area without the need for homologation of their degrees, after verification by the competent Educational Administration that those who accredit an equivalent level of education. Access in this way will not imply, in any case, the homologation of the previous degree that is in the possession of the interested party, or its recognition for other purposes than that of studying the master’s artistic teachings.
Applications must complete the application form pre-enrollment, which can be downloaded from the web page of ISEACV or in the Superior Conservatory of Music“OscarEsplá” of Alicante, with the curriculum vitae of the intereses party and the certificates proving the allende merits.

Before the entrance test, the candidate will have to pass an interview with the CAT, in which he will explain his expectations about the master’s degree, besides commenting on the questions related to his musical trajectory, curriculum and other aspects. L If the CAT considers it appropriate, it may include in the interviews a written test to assess the candidate’s general knowledge, consisting of a commentary on a musical text and bibliographical citations.

As selection criteria for admission to the master’s degree, the following elements will be assessed:

It will consist of the interpretation of a program with pieces of different styles, whose duration does not exceed 20 minutes. The following concepts will be evaluated:
–    Fidelity to the text.
–    Stylistic correction.
–    Respect to the tempos, the agogic and the dynamics.
–    Appropriate technique.

The applicant that obtains a qualification inferior to 5, will be eliminated of the test of access, reason why it will not be able to pass to the assessment of merits.

In this phase the candidate’s curriculum will be evaluated taking into account the different elements that allow to guarantee its use in one of the different lines of specialization. The following scale is established:
– Candidate record in music studies
– Outstanding average rating: 0.4
– Average mark of note: 0.2
– Degree Degrees or university degree: 1 for each degree.
– Superior Music or Degree Degrees (only those that are different from the specialty chosen): 1 for each title
– Extraordinary final degree (Conservatory or University): 0’2 for each one.
– Mention of honor end of career (Conservatory or University): 0’1 for each one.
– Concert activity: up to a maximum of 0.5
– Publications and congress attendance: up to a maximum of 0.5
– Accreditation of the command of a foreign language (certificates issued by EOI and others: Cambridge, DELPH, Goethe, etc.). Only the highest level title will be scored.
– Title level B1: 0’1
– Title level B2: 0’2
– Title level C1: 0’3
– Title level C2: 0’4
– Seniority in teaching (only years of service in official and municipal conservatories will be valued): 0.1 for each year of service, up to a maximum of five years.

The final score will be the sum of the scores obtained in the entrance test and the merit assessment. In case of a tie between candidates, the one who has obtained the highest score in the access test will be ahead.
The places will be granted by rigorous order of punctuation, according to the number of vacancies that exist in each specialty. Applicants who have passed the entrance test, but who do not obtain a place, will not be kept the note, but they must make a new pre-registration and proof of access the following course.

The CAT will produce an annual report which will integrate results information as well as a detailed analysis of the factors associated with learning, in particular the achievement of competencies. It will analyze the learning outcomes in each of the subjects and various measures of satisfaction, as well as the available information about their annual evolution collected from questionnaires. In turn, an improvement and support plan will be developed for the promotion of the most deficient skills.

The Master’s program consists of 60 ECTS which are taught over an academic year, lasting 37 weeks and a half.
The academic period goes from September to June. The students can do a partial registration with a minimum of
20 credits in each academic period, equivalent to 33% of total credits.

Master of Arts in Interpretation and Music Research.

Training itineraries that develop the degree

Documents to be submitted:

The Master offers the possibility of mobility for the completion of the Master’s Degree Work. Student mobility will be organized, depending on the place of residence of the student, and the criterion of the tutor, through specific actions with the Superior Musical Institutions with which they have (or will have) signed agreements.

The general objectives of the Master in Artistic Studies of Interpretation and Research of Music are:

Provide advanced training of a specialized nature, oriented to professional specialization, promoting the initiation in research tasks in a way that will be largely self-directed or autonomous.
To promote in each student a process of continuous artistic development and of high quality that is in connection with the norms of the European Space of Higher Education.
To prepare musicians to enter the professional work world at the highest level, and to provide them with the flexibility, imagination and evaluation tools so that they can contribute to develop a professional praxis in today’s artistic life, developing self-confidence and the confidence of To be able to pursue his artistic career independently.
To foster in students the confidence in themselves to be considered, developed and consolidated as intelligent musicians, expanding and integrating their intellectual, emotional and physical resources, reflected in the practice of musical excellence, in the personal challenge and in the Taking risks in their specialization, planning and implementing personal projects, both in an individual job or as part of a team or team project.
To provide students with a learning and research environment that enables them to recognize and develop their potential, recognize and overcome their limits, feed back from diverse sources, including their peers, and integrate these elements into their development, supporting their individual need for study and Of conscious praxis.

Students must pass a minimum of 12 ECTS credits per year.
The permanence in the master’s degree can not exceed three academic years.
To overcome each subject the students will have two calls per year: June and September. It is considered that the condition of Not Presented does not consume call.
The Academic Commission for Music Studies of the ISEACV (CAE) may authorize, at the request of the student, on an exceptional basis and for duly justified objective reasons, such as serious illness or any other cause of force majeure, a new and unique call.

This course aims to develop and present high level programs outside the academic environment, interacting musically in different projects. In addition, it contributes to an interpretative work according to the characteristics of its modality and specialization, both in the solo role and as part of a grouping.
The students participating in the subject must carry out their practices with the collaborating groups and entities that have formalized their acurdo with the CSMA. The grouping where the practices are carried out is selected by the student, the tutors of the Conservatory, along with the students and coordinators of the different entities, who establish the dates of their practices.
Collaborating groups establish rules of participation depending on their needs, and the student can be part of them as a soloist or tutti, adequately assimilating the different subordinate, participatory or leadership functions that can be given within the formations, showing flexibility in the indications Of the director and capacity of integration in the group. During the internship period the student will carry out the tests and concerts established by the group selected for this purpose, receiving from the coordinator of the entity the planning and material necessary for the correct development of the subject. At the end of the internship, students and coordinators will present to the tutor the documents proving that they have taken this course.

Profile of tutors
The tutors of the students in the companies / institutions of artistic practices are the directors or the specialized teachers of the entities, that will be coordinated with the tutor of the student (the teacher of the main subject) and the person in charge of the practices in the Master to realize Monitoring and evaluation report.

Procedure for complaints, claim and suggestions

For any complaint, claim or suggestion, the Form (QRS) duly completed and signed will be submitted by registration of entry in the Administration. If necessary, the documentation deemed appropriate can be attached to it.

Quality Assurance System of the Master

The Final Master’s Work will have the following structure:

The Final Master’s Work will have the following rules:

With regard to written research work:

Calendar and courts for the Master’s Thesis. Academic year 2021-2022

FINAL REPORT OF THE MASTER